Welcome to the New South: Immigration and Segregation in Metropolitan Atlanta 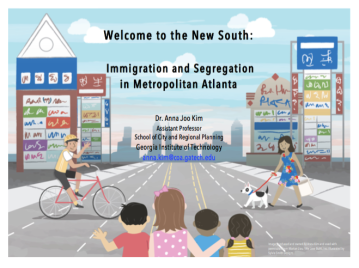 Atlanta envisions itself a new Global City, spurred by the addition of more than 250,000 new immigrants from India, South Korea, Mexico, and Ethiopia in less than ten years. Georgia is at the national nexus of new immigration, and Atlanta emerges as one of the largest cities in the South seeking to embrace this demographic change (Welcoming America, 2014). However, the growth has been rapid, uneven, and predominantly to the suburban fringes of Metro Atlanta. These suburban preferences have created new tensions, both spatially and socially. Although some smaller cities are embracing transnational capital investments by international firms and the influx of “high-skill” immigrant workers that come with them, other cities lack the resources and capacity to provide basic services. A newly positive attitude towards (some kinds of) immigrant growth also obfuscates the impact of statewide anti-immigrant and anti-refugee legislation, and ignores class segmentation among and between different ethnic groups.

Anna Joo Kim is an assistant professor of city and regional planning at Georgia Institute of Technology. Her research examines the blurred boundaries between informal and formal jobs for low wage immigrant workers, and how these semi-formal employment arrangements translate into strategies for local economic growth in ethnic neighborhoods. Dr. Kim teaches community and workforce development, planning for immigrant communities, and other courses on social, economic, and environmental justice. Prior to coming to Georgia Tech, she held the Andrew W. Mellon Postdoctoral Fellowship in Environmental Analysis at Pomona College.  Recently Dr. Kim has been awarded the highly competitive GT-FIRE (Transformative Research and Education Award) for her study of workforce development in Atlanta’s westside neighborhoods. For her graduate studio on multi-ethnic immigrant communities and immigration policy in Georgia she has also been nominated for the “Faces of Inclusive Excellence” honor at Georgia Tech. Her research and community collaborations have received grant awards from the National Science Foundation,  National Institutes of Health, American Studies Association, Center for Urban Innovation, UC Center for New Racial Studies, UC-CHIS, and the UCLA Labor Center.

View all posts by liafrederiksen