Transit priority measures allocate road space or intersection time to streetcars and buses to improve the speed and reliability of on‐road transit services. Examples of priority measures include transit signal priority systems, bus lanes and curb separated streetcar tracks. Streetcars and buses have greater people carrying capacity than private vehicles, which is a strong justification for prioritising transit in busy urban environments where road space is in limited supply.

VicRoads is the state road authority in Melbourne, Victoria, and has co-sponsored a PhD project to examine transit priority implementation from a public policy analysis perspective. This project is part of the Sustainable and Effective Public Transport Graduate Research Industry Partnership (SEPT-GRIP) at Monash University. The project was started in April 2017, and is now into its third year.

The two new frameworks suggest that implementing transit priority is inherently more difficult in Melbourne, Toronto and similarly car centric cities. Zürich and Curitiba have undertaken major programs to prioritise transit, but similar approaches have not succeed elsewhere due to a lack of legitimacy for providing high levels of transit priority in other cities. Despite this gloomy outlook, the case study research to date has identified five pragmatic strategies that are being successfully used to implement transit priority measures in car centric cities. These strategies are: 1. subservient priority; 2. grade‐separation; 3. bottom‐up and incremental implementation; 4. trials or pop‐ups; and 5. formal processes and public enquiry approaches.

This presentation provides an outline of the two new frameworks for transit priority legitimacy, and discusses examples of the pragmatic strategies that have been successfully used in various car centric cities to implement transit priority measures.  Marsden and Reardon (2017) called for greater consideration of “context, politics, power, resources and legitimacy” in the study of transportation policy. The research discussed in this presentation responds in part to Marsden and Reardon’s call, by identifying ways that transit can be prioritised in places where there is limited political and institutional support for changes that might negatively impact on private vehicles.

About the Speaker: James Reynolds completed a Bachelor of Engineering (Civil) (Hons) and a Diploma of Music (Prac) at the University of Melbourne in 2004, and a Master of Traffic and a Master of Transport at Monash University in 2010. He is a licensed engineer and has over ten years of experience in consulting in the areas of road safety, transportation planning and traffic engineering in both Melbourne and Toronto. 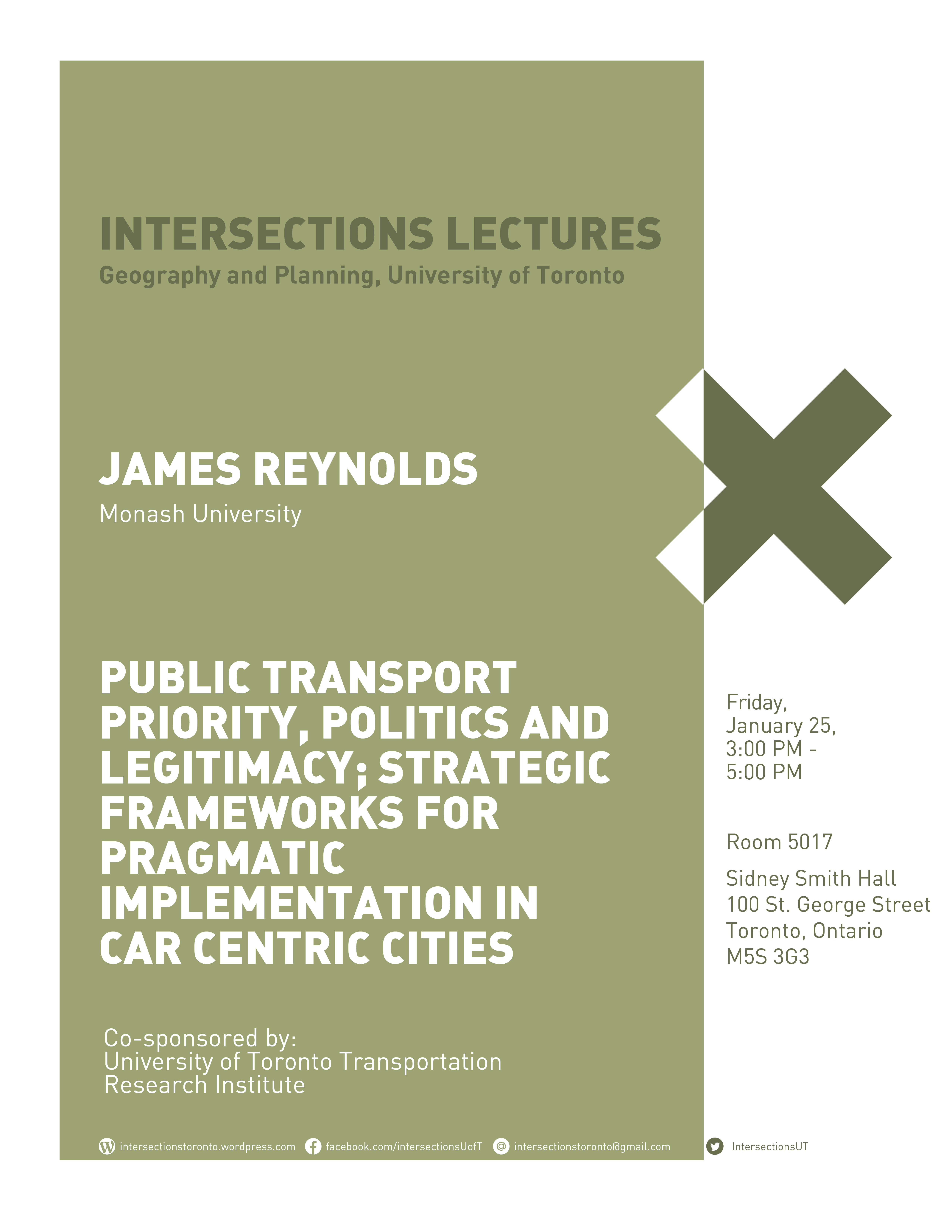